Wavestore establish a special relationship with US retailers

With more than 500 stores and with sales approaching $4billion, Burlington Coat Factory is one of the largest clothing retailers in the United States and Puerto Rico. Founded in 1972 and owned by Bain Capital since 2006, the company is placed on the National Retail Federation 100 top retailers list.

Burlington Coat Factory decided to make a substantial investment to improve and standardise the video surveillance at its stores by replacing equipment which had been sourced during the last twenty years from a number of different manufacturers.

“The systems are exceeding our expectations while improving productivity and efficiencies of our loss prevention efforts.”

Wavestore’s open platform philosophy was a key element in its VMS being specified for the project. The ONVIF Profile S Conformant software is able to simultaneously record images captured by combinations of analogue, IP, megapixel, HD and 360-degree cameras. “Every retailer has some kind of analogue system that still works. The biggest challenge is to save as much as possible from the existing system and investments while upgrading to an IP platform,” said Levy Acs, President and CTO of retailing solutions specialist American Integrated Security Group (AISG), who were awarded the contract to implement the upgrade programme and recommended that Wavestore should be at the heart of the upgraded video surveillance systems. “We design modular systems so when the retailer is ready to move to a completely IP system, the infrastructure is in place and the video recording solution can switch automatically without hardware change or licencing fees. The option of relocating and expanding the system was a key requirement from the customer due to the constantly changing landscape in a retail store. The ability to achieve this was enhanced by the implementation of a flexible IP-based camera system.”

The dewarping feature of Wavestore’s VMS is supporting the Vivotek 360-degree cameras that have been installed by AISG as replacements for up to eight analogue cameras which were previously covering the store’s check-outs. This feature is able to de-warp the fisheye images captured by a 360-degree camera and simultaneously display them alongside images from other analogue or IP security cameras in a user-configurable multi-image display. Unique to Wavestore, operators can view dewarped images created from the recorded image and control a ‘virtual’ PTZ function to track activity and save video clips of an unlimited number of individual events captured in the camera’s entire field of view. The process can be repeated as often as is required in order to extract and save the evidence.

In total AISG has installed between 15 - 25 of the Vivotek 360-degree cameras at each store, as well as between 5 - 10 AxisCommunications IP fixed mini-dome cameras.

245 of the company’s stores have so far been equipped with a Wavestore video recording and management solution as part of an overhaul of each of the store’s physical security equipment.

“The decision to upgrade CCTV capabilities is one of several significant measures the company has employed to address shortage issues in stores and provide a platform for additional use focused on marketing, operations and safety,” says Burlington Coat Factory Senior Vice President, Asset Protection, James Connolly. “The company has also upgraded its electronic article surveillance systems and expanded in-store burglar alarm coverage.”

Burlington Coat Factory management’s satisfaction with the success of the upgrade programme, which has seen shrinkage being reduced in some stores by as much as 90%, has resulted in AISG being tasked to progress with equipping other stores with Wavestore during 2014, and there are also plans to equip three of the company’s distribution centres and a proposed new corporate headquarters in Florence N.J.

“The systems are exceeding our expectations while improving productivity and efficiencies of our loss prevention efforts,” said James Connolly. “In addition, video records have proven helpful in managing company exposure from liability associated with accidents that occur on the property. Plus, law enforcement has used the technology to assist in the prosecution of criminal activity in stores and surrounding public areas covered by outside camera placements.” 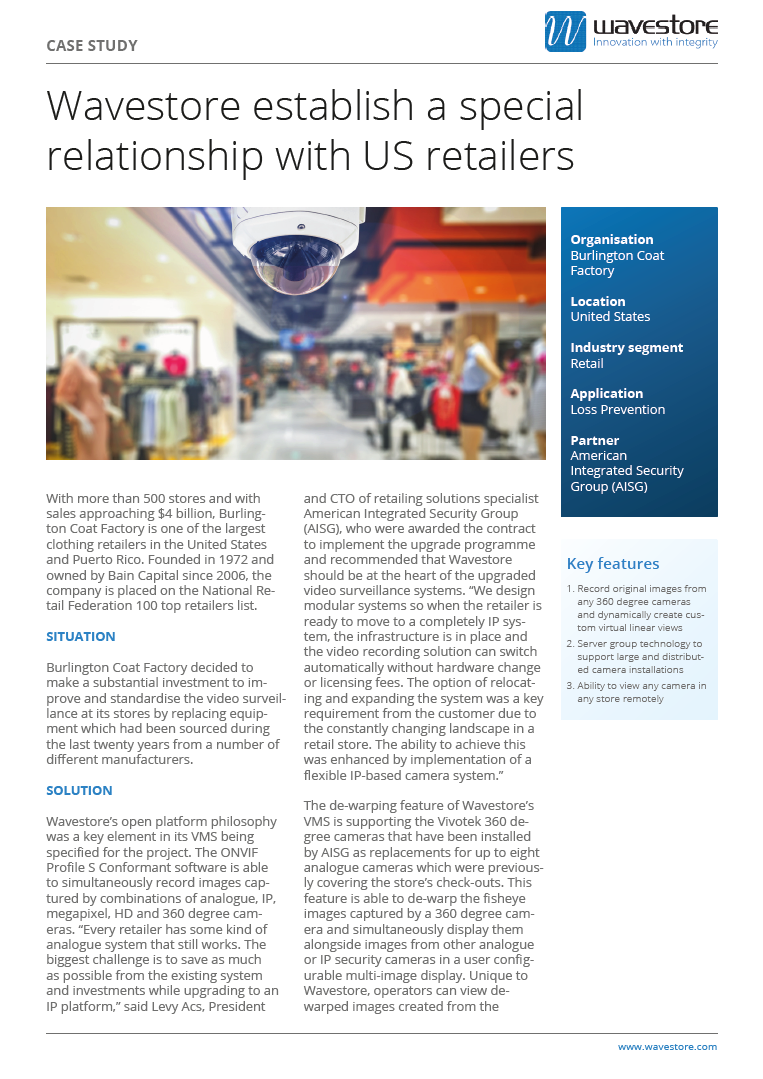