East Renfrewshire Council had established a comprehensive CCTV monitoring and recording capability that encompassed the city centre, public spaces and twelve schools. The ‘CCTV Safety Net’ commissioned in January 1998 initially comprised 14 security cameras, but the system was subsequently expanded. By the time the Council’s CCTV monitoring centre was relocated from a police station to a different location in Thornliebank in April 2002, a total of 95 cameras had been installed.

“The Council devised a plan to use Wavestore DVRs to record and monitor activity within Thornliebank Town Centre and the schools which are all linked into the Thornliebank CCTV monitoring centre via an optical network.

An appointed police liaison officer visits the monitoring centre on a daily basis. In addition, a direct line has been installed in order that operators can liaise with the police control room in Govan should police response be required to any incident. The police controllers also have the facility to remotely view the images being monitored and recorded.

Since its inception in 1998, the CCTV installed in the Town Centre has contributed towards the detection of many hundreds of arrests with the recorded video being used as evidence to successfully achieve convictions.

Monitoring of the schools outside of normal teaching time has significantly reduced the amount of vandalism and property damage, and the CCTV has enabled truanting school children to be identified and returned to their schools, which has, in turn, reduced the concerns that local traders previously held regarding petty theft.

The system has been extremely successful and has subsequently been upgraded with additional Wavestore recording equipment being installed to allow the monitoring of an additional 13 schools. 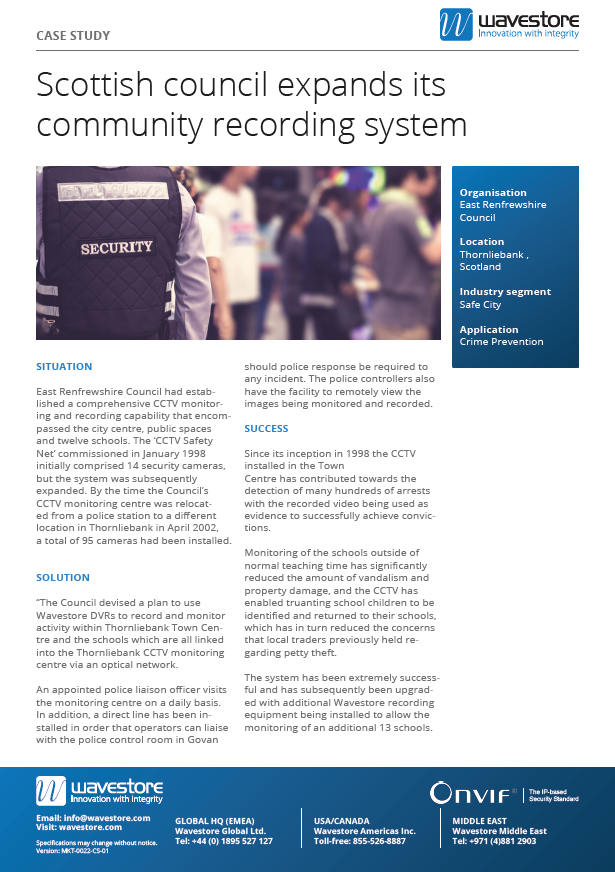