The 27 miles of the M6 toll allows drivers to bypass one of Europe’s most congested motorways. It was built and is operated by Midland Expressway Limited (MEL), a private company which employs over 130 people to keep the toll road, which cost £900 million to build, running safely and successfully.

Almost eleven years after it was opened, the M6 toll needed to upgrade its video surveillance system in order to increase recording capacity and comply with changing data security requirements.

The existing Wavestore system had originally been selected because of its powerful video management capabilities which would enable control centre operators to monitor traffic activity, maintain traffic flow and record any adverse events. With the M6 through the West Midlands being one of the most busiest sections of motorway in Europe, the objective was to facilitate shorter journey times, with time savings that could save people and businesses billions of pounds a year by dramatically reducing wasted the hours sitting in traffic and improved fuel efficiency.

“The Wavestore recording system has done everything we had expected of it but our requirements changed and the hardware was occasionally developing faults, although this was not a surprise as it had been in continuous use 24/7 for almost nine years,” said Paul Parry, Systems Maintenance Manager for MEL.“In particular, we needed to comply with the Payment Card Industry Data Security Standard and this meant having the capability to simultaneously record and store video evidence of secure areas for 90 days. As a result, we needed to invest in a substantial increase in the video surveillance system’s video storage capacity.”

Paul Parry and his colleagues at MEL considered the option to replace the Wavestore system with a video recording solution from another manufacturer. “At the time we originally installed Wavestore, we were particularly impressed with the Wavestore GUI, which is simple to use and intuitive requiring little or no staff training,” said Paul Parry. “Nine years is, however, a long time and particularly so when technology had been advancing at such a rapid rate. We, therefore, felt we should at least take a look at what other solutions were available.”

“We were particularly impressed with the Wavestore GUI, which is simple to use and intuitive requiring little or no staff training.”

After considering proposals from other manufactures, MEL made the decision to stay committed to a Wavestore solution and in addition to ordering larger capacity video servers, the company also commissioned the installation of an updated version of the Wavestore VMS (video management software). “Our research did not lead us to believe that any other manufacturer could do a better job and it was certainly a major advantage to stay with a system which our operators were happy working with and we were fully trained on.” Images from the 100 plus cameras installed across six toll stations are recorded locally on Wavestore servers and can be accessed at any time by operators in the central MEL control room.

The upgrade of the M6 toll video surveillance highlighted in this case study was carried out in 2012. Since then MEL has commissioned a further upgrade in order that the operators within the control centre can take advantage of the innovative new features incorporated into version 5.44 of the Wavestore VMS. The software allows video images to be configured and displayed on a monitor in a large variety of sizes, formats and positions and also includes a de-warping feature for images captured by 360degree cameras. 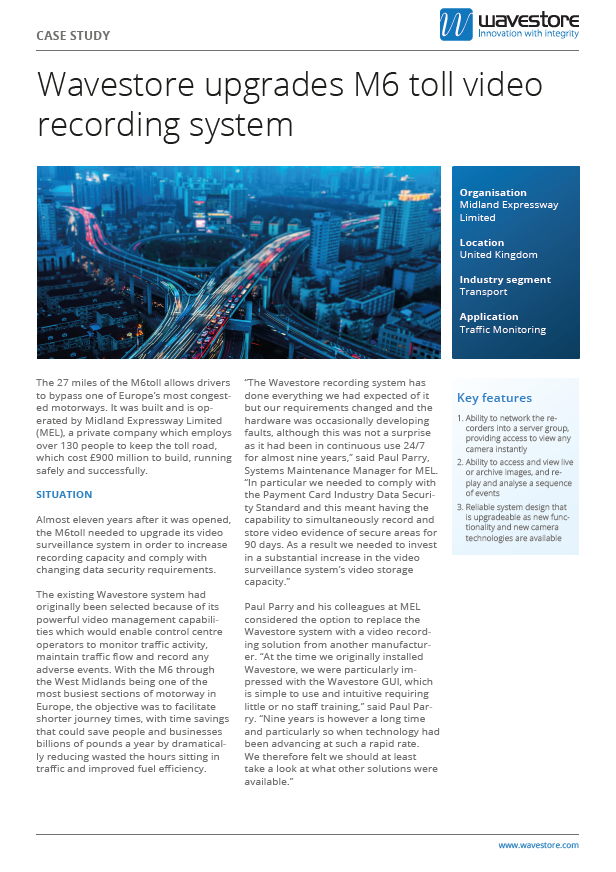