Following the terrorist attacks on 7th July 2005, Alstom Transport, the management company responsible for the supply and maintenance of trains on the London Underground Northern Line, requested the development of CCTV review workstations which would enable the forensic analysis of video captured by security cameras.

Wavestore was commissioned to urgently produce the software and hardware to enable an analysis of video and data from the trains’ digital recorders, to be carried out. A fast track development programme was immediately established for this crucial work and a prototype system was operational in less than a week.

Wavestore provided a solution which allowed the entire contents of several recording devices to be copied onto a single large back-up storage system. Although each recorder held 72 hours of CCTV recording, all video files were able to be copied in 18 minutes.

Wavestore software provided very fast access to the recordings which enabled users to go back into the archive using simple time and date markers, or by dragging the unique ‘waterfall’ recordings display to access every camera. Snapshots could be exported into JPEG, PNG or BMP formats or printed out directly onto a printer. Selected video clips from multiple cameras could be further copied onto CD-R or DVD-R for playback and review on any PC. The Waveplayer application software could be included onto the disks if required.

Image by image analysis could be performed with image enhancement tools available to improve pictures that may be recorded in challenging environments. Further tools were made available to allow for the intelligent searching of motion in selected areas, on multiple cameras.

The subsequent attempted terrorist attacks in London on July 21st prompted the immediate deployment of Wavestore’s prototype review workstation and the Metropolitan Police were able to quickly analyse and identify a suspect from the Oval Station train.

The recorded images were released to the media on July 22nd and were used, along with many other sources of CCTV evidence, in the trial which found four defendants to be guilty. 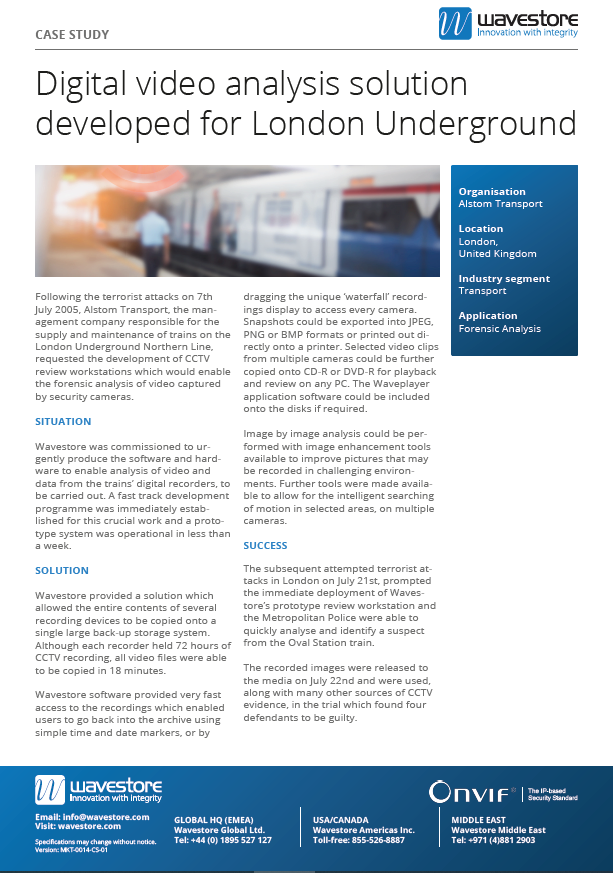